How to set up a real landscape

This page describes the required steps and concepts for setting up a real landscape in iLand.

A real world project area is defined by a mix of GIS based data and other parameters/data. The GIS capabilities of iLand are limited: basically iLand is able to read grid files in the ESRI text-based grid format. The real world coordinates of the grid are transformed to the internal local coordinate system of iLand. The transformation is defined by the keys in the model.world.location section of the project file. The coordinate transformation is defined once and used for all grid files loaded for a model run. iLand performs no GIS projections and assumes flat metric coordinates.
The spatial resolution for input map files is not fixed; however, in most cases an internal grid aligned with the 10m height grid and clipped to the project area is derived from the input grid.
Note that the same type of spatial input files is not only used for the set up of the initial stand structure, but also for, e.g., management.

Setting up the stand grid


The stand grid defines the spatial distribution of forest stands at the beginning of the simulation. A stand is defined by a numeric (integer) ID greater than zero. Pixel values of -1 (or the NO_DATA_VALUE of the grid) are considered to be non-project-area. For instance, no regeneration establishes on such pixels. The stand grid is loaded during startup from a file specified in model.world.standGrid.fileName (and if model.world.standGrid.enabled is true). When displaying the "dominance grid" in the iLand viewer, non-project-area pixels are painted in white. 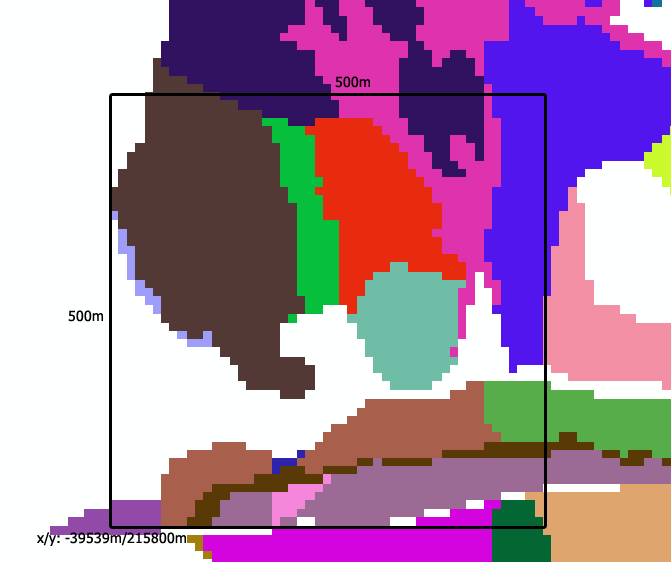 The screenshot taken from a GIS application (e.g., ArcMap) shows the target landscape. The shown grid is derived from stand polygons and has a cell size of 10m. Blank pixels are not within the project area.
Also indicated are the metric coordinates of the lower left corner of the project area. The black frame indicates the planned simulation area (i.e. 500m x 500m). The next step is to export the grid file with the same projection to the ESRI text file format.

The following snipped shows how to load this landscape into iLand:


There are options for setting up the trees selected by the tree initialization mode: you can use map for individual init files for each stand, or standgrid for one large init file containing a stand_id column.

A simple CSV-style textfile defines for each stand ID the file name of a stand initialization file. This data file is referred to by the key model.init.mapFileName and is expected to contain two columns named id and filename with pairs of stand IDs and stand file names, respectively.
Each file in that list is loaded into the corresponding stand if model.initialization.mode is set to map and valid stand grid and mapFileName input data files are provided. Currently, only the distribution/iland mode of initalization files is supported. Tree numbers are always interpreted as trees per hectare and scaled to the actual area of the stand.

Example for a init file (Note that not every possible stand is assigned a init file):

Here, the init file contains an additional column (stand_id), that links to the stand polygons described above. Each stand is initialized using all lines in the init file with the respective stand_id. Note that this mode does not support single tree initialization files. 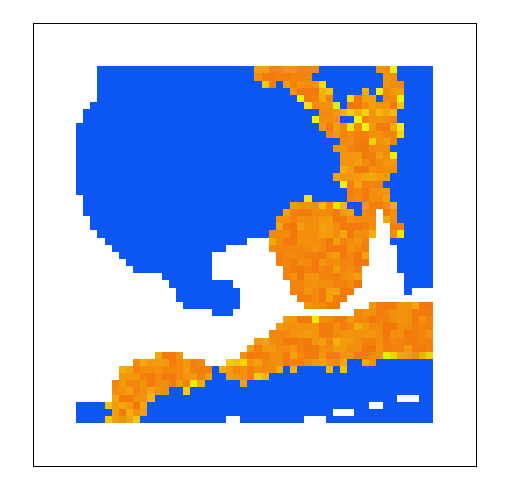 The iLand-screenshot shows the 10m dominance grid; blank areas are outside of the project area (compare to the image above), blue areas are without initialized vegetation, and orange/yellow are four stand polygons that were successfully initialized.

Generally, the stand grid (see section above) defines the project area, i.e. all 10m pixels with a dedicated stand are considered as active part of the simulation area. All other pixels are "outside". "Outside" pixels cannot grow trees, they are not considered when collecting radiation, etc. However, iLand distinguishes two types of outside area: namely forested and non-forested areas. The values of the stand input grid decide on the type of area: a grid value of -1 or the defined NO_DATA_VALUE (defaulting to -9999) means "non-forested outside pixel", a value less than -1 (e.g. -2) indicates a "forested outside" pixel. If a outside pixel is "forested" some differences apply:

The initialization of various other parameters (e.g. soil properties, mapping to climate, initialization of snags and soil pools) are on a per resource-unit basis. This is handled by the mechanism with environment files described here.